Willie Mullins dominated the Grade 1 action at the weekend, when his most significant winner on RPRs was Faugheen (176), whose runaway success in the Irish Champion Hurdle ranks him as the best two-mile hurdler since Istabraq, writes Sam Walker. 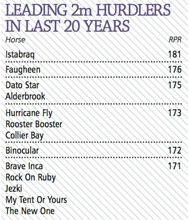 The eight-year-old’s 15-length win over familiar rival Arctic Fire (160) was the best performance we have seen from Faugheen – and the best from any two-mile hurdler for the last 15 years.

Nichols Canyon (151) may have underperformed in third, but the margins were huge, the time was good and the winner was really impressive.

Faugheen’s odds for a repeat Cheltenham success were cut after this victory, while perhaps more interestingly the odds of distant second Arctic Fire were also clipped, making him clear second favourite. That says it all about the lack of competition for the Stan James Champion Hurdle favourite.