GREAT NAMES FROM THE WORLD OF RACING JOINED FAMILY, FRIENDS AND COLLEAGUES OF PAT EDDERY OBE ON TUESDAY TO PAY TRIBUTE TO ONE OF THE GIANTS OF THE SADDLE AT THE FUNERAL OF THE 11-TIMES CHAMPION FLAT JOCKEY.

Figures from Eddery’s past and present including Frankie Dettori, Willie Carson, Richard Hughes, Joe Mercer, Geoff Lewis, Jamie Spencer and trainers Peter Walwyn, John Dunlop and Sir Michael Stoute were among the congregation at the St Mary The Virgin Church in Thame, Oxfordshire.

They heard Eddery, who died of a heart attack aged 63 last month, described as having the most gifted hands ever seen in a eulogy delivered by journalist and broadcaster Brough Scott. 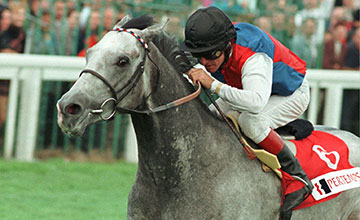 ‘In the saddle he could rule the world’

Scott said: “He was so supreme that his fellow jockeys nicknamed him ‘God’. Back on earth he was easy going, humble, kind, smart and generous. In the saddle he could rule the world – and he did.”

He added: “It was a greatness that he wore without a swagger. He was the least conceited or confrontational of champions but the obviousness of his gifts and the swell of his success should never let us think that one led to the other without an immense amount of drive, daring, dedication, deep racetrack intelligence and in-running calm.”

Some of Eddery’s many riding triumphs were pictured on his coffin which was decorated with images of his best moments, one side of the box emblazoned in a photograph of the finish to the 1986 Prix de l’Arc de Triomphe which he memorably won on Dancing Brave.

The Tina Turner song ‘Simply The Best’ was played over the church speakers as Eddery’s coffin was carried out of the church by a team of jockey bearers comprising of Dettori, Tom Queally, Richard and Michael Hills and Tony Clark.