LONG RUN, the 2011 Cheltenham Gold Cup winner, was retired after failing to show his old spark on his return from a near two-year absence in a hunter chase at Carlisle on Sunday.

Rider Sam Waley-Cohen was also given a controversial seven-day ban for easing up on his beaten star.

Connections had mooted a possible tilt at the Crabbie’s Grand National had Long Run’s comeback from injury gone well but after finishing a tired fifth they called time on his brilliant career.

The winner of six Grade 1 races in France and Britain, Long Run will be best remembered for his epic Gold Cup victory against Denman and Kauto Star at the age of six, when trained by Nicky Henderson.

Now 11, the dual-King George winner had been nursed back from a leg injury sustained on the ferry home after his last run in the 2014 Grand Steeple-Chase de Paris by owner-trainer Robert Waley-Cohen.

The horse’s enthusiasm appeared to remain at Carlisle and he was soon at the head of affairs in the 3m½ contest, in which he was rated at least 11lb superior to any of his eight rivals.

However, he lost his lead with a bad mistake at the tenth and hopes of a winning return faded with two more poor jumps at the next two fences.

As the Keith Reveley-trained Robbie got the better of 14-year-old Ockey De Neulliac in the last stride, Long Run was a tired horse in behind and surrendered two further places close home as Barachois Silver and Durban Gold relegated him to fifth.

Despite the horse appearing weary, the stewards inquired into why the rider had “appeared to stop riding after the final fence on the run to the line” and found him “guilty of failing to take all reasonable and permissible measures to obtain the best possible placing in that he failed to ride out on a horse that could have finished third”.

Robert Waley-Cohen vowed to appeal the ban, which he described as unfair. He said: “I’ll appeal, it is most unfair. I would rather he got a ban than ruin the horse, he did the right thing.”

“That’s it for Long Run now, we will find something else for him to do,” added his owner-trainer. “He’s been a wonderful horse, I’ve had him since he was a three-year-old and he has given us some fantastic moments notably his Gold Cup win and his two King George wins.

“He was a marvellous patient after that injury, but he wasn’t the best of hunters, though to be fair to him we were looking after him and it would be different if he were doing it all the time.”

Long Run retires as the winner of 15 of his 33 races under rules and £1.5 million in prize-money. 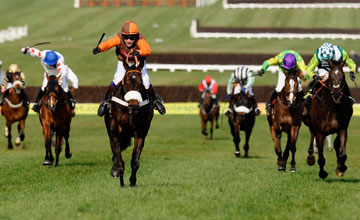 When Long Run burst onto the scene in the waning years of the Kauto Star-Denman era he looked like a ready-made replacement for those superstar chasers.

A Grade 1 star in France, Long Run stunned racing on just his fifth run in Britain as he beat Kauto Star in the 2010 King George (actually held in January 2011). He followed up in the Gold Cup, comprehensively beating both Denman and Kauto Star.

Aged just six it looked like a new order was being forged but eight months later Long Run was the victim of one of racing’s most remarkable comebacks as Kauto Star landed the Betfair Chase and King George.

Long Run bounced back to win a second King George in 2012 and twice finished third in the Gold Cup, but his star never again shone quite as brightly as it did during that remarkable 2010-11 season.