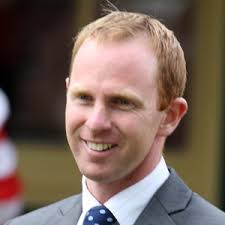 David entered the training ranks with a bang in 2010. A successful NH jockey for 13 years, David has now turned his hand to training. He rode for Tim Easterby and had a successful partnership with a number of very good horses including Turgeonev and Bells Life. The latter providing him with a notable success in the Foxhunters’ at Aintree in April 2000.

The philosophy of the yard is very simple. Based on teamwork and putting the welfare of the horse first, the winners will come. With around 100 horses in training, the future looks exciting. Confident that any owners with a horse, or just a smAlthough it does have its disadvantages, as David is always the first in the firing line if things don’t go to plan!! He has many horses in the yard that have a special place in his heart. Blue Bajan gave him his first Group winner, while Penitent won two Group 2′s in 2012 and finished second in the Foret. Having come so close in that Group 1 with Penitent, G Force was the first to break the Group 1 barrier when winning the Haydock Sprint Cup this season.

The transformation of horses, is something David is fast at getting a name for and gaining much respect from the racing world. Move In Time is a great example of his extraordinary talent. Rated 85 when joining David, Move In Time progressed right through the ranks to land the Group 1 Prix De L’Abbaye this season.