IT WAS billed as a race for the ages and it delivered in spades as two superstars battled every yard and every inch to the line before Cue Card emerged as King George champion.

After three miles it took the judge to separate him and Vautour, but it was the nine-year-old Cue Card who was finally victorious in the King George at the fourth time of asking.

There was a sour note, however, as stewards fined Brennan £4,200 and banned him for 11 days for using his whip above the permitted level. The intensity of the finish was reflected in the fact Ruby Walsh also picked up two days on Vautour.”That’s the best feeling of my whole career,” said winning rider Paddy Brennan. 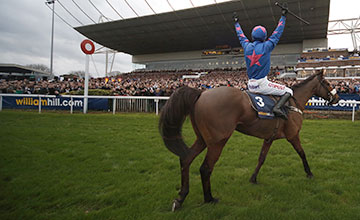 Willie Mullins did not rule out a rematch in the Gold Cup in March, a race in which Cue Card could land connections a £1 million bonus if adding chasing’s most prestigious event to his Betfair Chase and King George wins.

“He did everything right bar the last 20 yards,” said Mullins. “He probably didn’t jump the last as efficiently as he could have. It probably looks like his stamina ebbed away. We’ll wait and see what we have to run in it [the Gold Cup]. I won’t be taking him out because of that.”

For much of the straight it did not look like Cue Card would get to six-year-old Vautour, and when he walked through the last it seemed his chance was gone.

But Vautour did not produce the cleanest of jumps either and from the back of the last his stamina began to fade, with the ever-game Cue Card gradually grinding him down.

“People said he didn’t stay, but it’s taken him to the line to get there,” said Brennan. “It was a true race, I’m not going to lie and say there was loads there, I got to the bottom of the tank.”

A clash for the ages

It was a gruelling race. Two-time King George winner Silviniaco Conti set a strong gallop, with Walsh emerging towards the front with a circuit to go and lifting the tempo further still, much like he used to on Kauto Star. 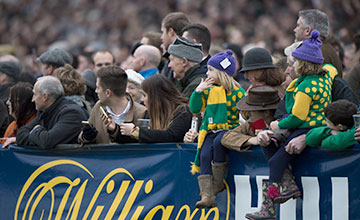 Bold jumps leaving the stands saw Vautour turn into the back straight in the lead. Cue Card and Hennessy hero Smad Place were also looming large, while Don Cossack worked his way through the field.

With Vautour jumping to his left Brennan shifted to his inside, but turning for home Vautour looked all over the winner as both Brennan and Bryan Cooper – on Don Cossack – were hard at work in behind.

With Smad Place and Al Ferof fading it was left to racing’s bright young hope, the returning superstar and the highest rated chaser in Britain and Ireland to fight out the finish.

Jumping three out Vautour still led, with Walsh waiting in the saddle. Approaching two out it was Don Cossack that looked the danger as he moved alongside Cue Card, but a blunder at the next put him down on his nose.

Then there were two. Walsh began to get after his mount. Brennan, who had been doing exactly that since the home bend, was giving it everything he had but after untidy jumps at the last it looked like Cue Card’s chance had gone. 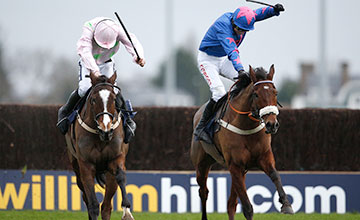 But he was nothing if not game. Vautour’s length and a half advantage became just a length. Then it was half a length, a neck; the post loomed. It was a pulsating finish to a breathtaking race.

“It was a tight one,” said Brennan. “The last time I got in one with Ruby was Imperial Commander against Kauto Star and I thought I’d got there then and I hadn’t. Today he said I’d won.”

Thoughts soon turned to Cheltenham, for which Cue Card is now no bigger than the 7-1 offered by BoyleSports and Ladbrokes, and Brennan added: “If there’s any man that’s going to get him back in that kind of form for the Gold Cup it’s Colin Tizzard.”

Trainer Gordon Elliott said his charge was “fine” after his late fall and addeded: “I’m not sure what we’ll do next. There is no reason why he couldn’t go straight to the Gold Cup and you definitely wouldn’t be in a hurry to run him again after a fall like that.”

John Hales, who owns Al Ferof, third in the race for the third successive year, said: “I was very pleased with him. It was a fabulous run. He is a new horse this year.

“He’ll go straight to Cheltenham now. He’s not a Gold Cup horse but I’ve never won the Gold Cup. He is probably a specialist two-and-a-half-miler and so the Ryanair will probably be next.”